First thing I had to do was find a bariatric doctor that was covered by my insurance. I found two of them nearby and researched each doctor online. I looked at reviews and thoroughly scoured their websites. One of the two doctors stood out by far with lots of awards and positive reviews. I called their office and made an appointment. It has been confirmed many times over the last six months since I made that appointment that I made the right choice. Everyone in the medical field that I have talked to asked me who was going to do my surgery. After I tell them, the response was always the same: “Oh yes, he is a great surgeon! He is the best bariatric surgeon in the area!”

This is me before starting the program. 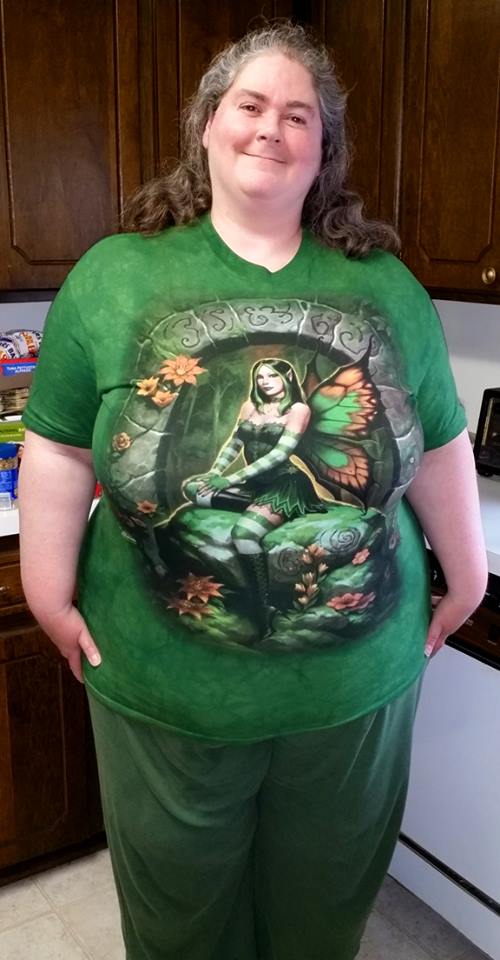 It did cost $250 to join their program. See they don’t just do the surgery and shove you out the door. They want to make sure that you succeed. They want to make darn sure you are ready for the surgery and not going to have the surgery and then have “buyer’s remorse”. It is a big decision and if you are not sure you want to do it, you will have time to change your mind – but this helps weed out the people that are not serious. A gastric bypass is a life-time commitment. It will change the way you eat for the rest of your life. No going back.

I started the program October 21, 2015. Since then, I have had many appointments with the bariatric doctor to see how I am doing on the program and for weigh-ins.

Ok – let me explain how the program works. After the initial appointment and weigh-in with the bariatric doctor, they have you do bloodwork to see where your vitamins are at and if any are low, you are requested to take vitamin supplements to correct the deficiency. I found I was low in Vitamin D (imagine that – as I have alabaster skin and burn in 5 mins under the sun). I had an ultrasound done on my legs to make sure there were no blood clots in them (none were found – phew!). An ultrasound was also done on my gallbladder to make sure I didn’t have any gallstones. They check for stones because they can remove the gallbladder at the same time as the weight-loss surgery since they will be working in that area anyway. Turns out I do have gallstones. They asked if I wanted to wait for any pain to show up before having it removed or just remove the gallbladder at the same time as the surgery. I thought to myself, “wait for pain?” and told them to just remove it at the same time.

I was then handed a list of specialists that I will need to see. I was told these doctors will call me to set up an appointment. There were six doctors in all. First one was a sleep study. They had to find out if I had sleep apnea. What is sleep apnea? Here is an explanation I found on Yahoo Answers:

“Sleep apnea is a serious sleep disorder that occurs when a person’s breathing is interrupted during sleep. People with untreated sleep apnea stop breathing repeatedly during their sleep, sometimes hundreds of times.
There are two types of sleep apnea:
Obstructive sleep apnea (OSA): The more common of the two forms of apnea, it is caused by a blockage of the airway, usually when the soft tissue in the back of the throat collapses during sleep.
Central sleep apnea: Unlike OSA, the airway is not blocked but the brain fails to signal the muscles to breathe due to instability in the respiratory control center. ”

Not getting enough sleep (a good and proper sleep) will mess up your metabolism and hinder weight-loss. Not to mention sleep apnea will make you tired, cranky, sometimes have headaches and wake up in the morning feeling more tired than when you went to bed. I had some of those symptoms so I suspected that I did have sleep apnea. What is a sleep study like? This cartoon captures it perfectly.

Turns out I did have obstructive sleep apnea. Usually, the first half of the night they determine if you have sleep apnea. The second part of the night (if you are positive for sleep apnea) they try you out on a CPAP (Continuous Positive Airway Pressure) machine that blows air through a face mask and helps keep your breathing passages open. In reality, since I am such a light sleeper, I had to do the test in two appointments. It took me four hours just to fall asleep. Then I had to buzz the attendant a few hours later when I had to go to the bathroom and they had to help unplug me from the machine so I could walk down the hall. I still had all of the sensors attached, just the wires were unplugged from the machine so I had to carry the wires with me and throw them over my shoulder to “tinkle” in the bathroom. I got back to my room, the attendant plugged me back in and I lay there trying to fall asleep again. I think I slept for a couple of hours before I was awoken by the attendant who turned on the light and told me that it was 5:00am and the study was over. I was told that I slept just long enough to determine whether or not I had sleep apnea. They would call me to see if I needed to return for another sleep study to try out a CPAP machine (after it was confirmed by a doctor if I did indeed have sleep apnea). I went home and went to bed.

A few days after the first sleep study, they called me and told me that I did test positive for sleep apnea and needed to make an appointment to come back in and do another sleep study but this time with a CPAP machine to make sure that it would cure the sleep apnea. Again with the millions of wires….but this time I also had a mask strapped to my face and the strange sensation of air being forced into my lungs. As with before, I slept just enough for them to determine their results. I was told that the CPAP machine worked in curing my sleep apnea. They also said that I should feel so much better after finally sleeping without the apnea interrupting my sleep. Yeah…sure maybe if I was a heavy sleeper. I felt like telling them, “Let’s strap a million wires to your body and a large mask to your face in a strange bed and see how well you sleep!”

The attendant said that I still had the whole day to go out and get things done because I should feel so much better! I went home and went to bed.

About a week after the second sleep study, I got a call from a Home Medical Equipment company to make an appointment to get a CPAP machine and get fitted for a CPAP mask. “Fun…” I think, “I am already a light sleeper, so sleeping with a mask strapped to my head with a hose leading from it is so totally going to help me sleep better”. After the fitting and getting trained on the proper use of a CPAP machine, I went home with doubt in my heart that I will ever be able to sleep properly again. That first night it was like wrestling an octopus….and the second night….third night…..second week…..third week…..eventually I would just sleep out of pure exhaustion. It was more of a passing out than falling asleep. After a month they asked me how it was going with the CPAP machine. I told them “not very well” and asked how long it takes for someone to get used to the machine and mask. The reply was, “Oh, it is different for everyone. Some people get used to it in only a week. Most get used to it in the first month. But some people have been known to take 3 months to get used to the CPAP.” Great….

I did stick with it and used it absolutely every night. You know what? I did eventually get used to it – three months later. But now I am glad that I have it. I do wake up more rested even if I do still have to wrestle with the air hose every time I turn over. I have occasionally taken a nap without the CPAP machine and I notice a huge difference. I don’t get any rest when sleeping without the machine. So in the end, it worked out.

About three months after getting the equipment, I went in for a follow-up. Instead of a sleep study, this time I brought my CPAP machine in and they downloaded the info from the machine to see how well the sleep apnea had been cleared up. I was told it worked perfectly and that I no longer stop breathing during sleep while on the CPAP machine. That is good. I told them that I was also finally getting used to the machine and did sleep a lot better. I will have to return in a year just to make sure that the CPAP is still doing it’s job. But other than that, I was done with this leg of my weight-loss journey.