First was the weigh in. I am back down to 394! Bye-bye Easter candy!
They discussed with me what to expect the day of the surgery and what to do the day before and morning of the surgery. I was given two items. The first item was a clear plastic package with two individually wrapped bottles and hand “towels” (a terry-cloth mitten). A two minute timer (an hourglass with sand) and instructions were also included. Inside the bottles were an antiseptic/antibacterial soap called Dyna-Hex CHG (chlorhexidine gluconate) solution. One bottle and towel was marked “Morning” and one was marked “Evening”. As expected, the “Evening” package is for use the night before the surgery. The “Morning” package is for the morning of the surgery. Both are to be used in the shower. After washing my hair, I need to use the solution to wash my entire body from the neck down and leave it on for 2 minutes (hence the timer). After the timer is up, rinse off. Same for the morning of the surgery. These are to help prevent any infections after the surgery. The antibacterial solution is going to kill most of the bacteria on your body including the staph bacteria which 1 in 3 people carry on their body at all times. This bacteria is normally harmless unless it gets infected in an open wound. This is why they made the CHG solution – to kill most if not all of the bacteria on the skin before surgery to greatly lessen the possibility of getting a infection.

The other item that was handed to me was a plain white cardboard box. Inside were two leg cuffs to be placed on the calves after surgery. They are used to help prevent blood clots in the lower legs. I was told that I could wear these for up to 10 days after the surgery, depending on how often I walk. Apparently, if I walk daily, then only a few days. I will ask the nurse after the surgery how long for sure. The leg cuffs have velcro to wrap around the leg and have an air tube leading out from them. There was also an air pump/battery pack that came with a cord to plug into the wall. The cuffs provide alternating pressure on the legs to keep the blood flowing. 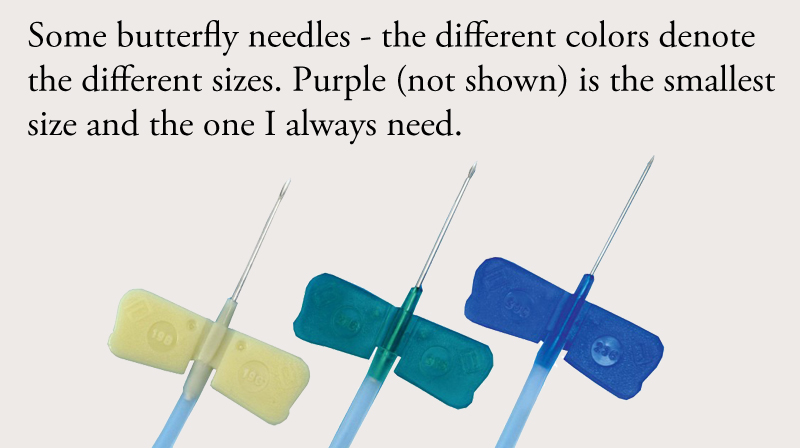 After my appointment, they had to do some bloodwork and get a urine sample for some final tests to check for any infections and check my vitamin levels. As usual, I tell the lady that will be drawing the blood that she will need the smallest possible butterfly needle made. Even with the butterfly needle, the lady trying to draw the blood could not find a vein after poking around for awhile and gave up. Using a cotton swab and tape, she covered the spot where she stuck me with the needle. I was sent upstairs to the lab to have a professional phlebotomist draw the blood and have me “pee in a cup”.

I went upstairs and waited to be called back. Well this lady phlebotomist knew her stuff. She got it with one stick and I was done in only a few minutes. She was a large lady like me. After drawing the blood, she turned around to enter all my information into the computer. She knew I was there for my last doctor visit before weight-loss surgery and we were discussing how much my life will change. I told her, “You know, it’s amazing all of the things that skinny people take for granted.” She stopped typing and turned around, eyes wide. She spoke slowly and told me, “Say that again…” and looked into my eyes. I repeated myself and she said, “Girl don’t you know it!!!” We then mentioned different things that skinny people might take for granted: like being able to sit in a movie theater or an airplane, sitting in a booth in a restaraunt, being able to use a seatbelt in a car without a seatbelt extension, being able to use a regular bathroom stall, buying clothing in a store instead of having to buy all your clothes online at one or two special “Plus Sized” stores and being able to fit in an office chair at work (I know this one very well – most work places don’t have large enough computer chairs so either I have to sit in a tiny chair that is crushing my legs or buy one and bring it in).

My bloodwork results did come back showing that my white blood cell count was a bit high. I told them that it was because I have psoriasis and it often creates a high white blood cell count as it is an autoimmune disease (over-active immune system). I also told them that another doctor back in mid-March (less than 2 months ago) also found my white blood cell count a bit high and ordered chest X-Rays to make sure I didn’t have pneumonia or some infection in my lungs. Those X-Rays came back clear. My bariatric doctor wanted to see those blood test results and X-Ray so I had my other doctor send them over. I got a call a couple of days later from my bariatric doctor’s office telling me that they got the tests from the other doctor but still needed an updated X-Ray as “normal procedure”. I was mad at this as I am already getting about one medical bill a day in the mail and doing yet another chest X-Ray just seemed so redundant and stupid. But my hands were tied. If I didn’t get the second X-Ray, then they wouldn’t perform the surgery. Plus I had to do it the day that I was going out of town – so I left straight from the imaging place to my destination. The next week I called my bariatric doctor and asked if they got the new X-Rays back yet. She said they did and that they were clear. Imagine that. So I asked if I was still cleared for surgery, and she said that I was. Onward!